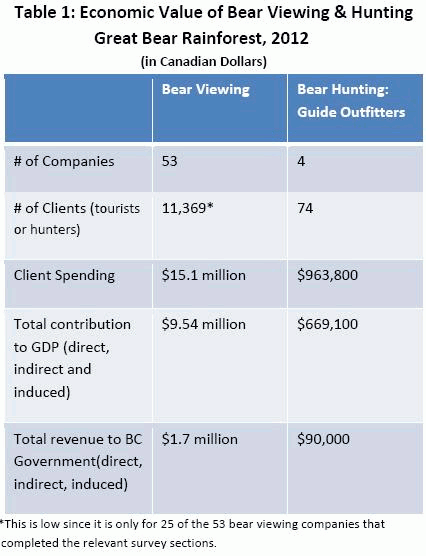 Value of Bear Viewing in BC, CanadaWASHINGTON, DC— 8 January 2014: A new study released today finds that bear viewing ecotourism in British Columbia’s Great Bear Rainforest “generates far more value to the economy” in terms of revenue, taxes, and jobs than the older and more well-established trophy hunting of grizzly and black bears.  The study by the Center for Responsible Travel (CREST), Economic Impact of Bear Viewing and Bear Hunting in the Great Bear Rainforest of British Columbia, determined that in 2012, bear viewing in the Great Bear Rainforest, which has been growing rapidly over the last decade, generated 12 times more in visitor spending than bear hunting and over 11 times in direct revenue for BC’s provincial government. The study further found that bear-viewing companies directly employed an estimated 510 persons in 2012, while guide hunting outfitters generated only 11 jobs that same year.

The CREST study, the first to compare the economic value of these two sectors of wildlife recreation in the Great Bear Rainforest (GBR), comes in the midst of public controversy over trophy bear hunting.  In 2012, the Coastal First Nations, representing some 20,000 First Nations people who are seeking greater control over the GBR, announced a ban on trophy hunting of bears throughout the region. They argued that, among other reasons, trophy hunting is threatening the growing ecotourism industry centered on bear viewing.  The BC government, contending that the province has the sole authority to regulate hunting, has continued to authorize hunting of black and grizzly bears in the GBR.

“Given the sensitivity of the debate and the range of statistics being cited for the value of hunting and viewing, CREST decided to undertake an impartial, academically rigorous analysis to try to nail down the numbers,” says CREST Co-Director Dr. Martha Honey who led the project.  The study was conducted by CREST researchers at Stanford University and in Washington, DC, together with two BC-based experts.  “Our findings clearly show that bear viewing is today of far greater economic value than bear hunting in the Great Bear Rainforest and that bear viewing is a growing, while bear hunting is declining.”

Other Key Findings Include:

2. Bear viewing is a key factor bringing international tourists to the GBR from Europe, Asia, and the United States. While the total number of tourists coming to the GBR for bear viewing could not be fully determined, 25 of the 53 companies surveyed reported hosting 11,369 visitors in 2012. That same year, there were 74 hunters from outside BC, 80% of whom are from the United States. Therefore non-resident bear hunting is more dependent on a single market—the U.S.--than is bear viewing, and the number of U.S. hunters coming to BC dropped 20% during the recent economic crisis.

3. The results of a new BC government-commissioned study, Expenditure of British Columbia Resident Hunters “appear inflated in a number of areas” and its estimate that resident hunting generated $230 million in BC in 2012 “may have overinflated the number of hunter days and spending per day.” (This study does not provide separate estimates for the GBR) Given these uncertainties, “it is not really possible to say how accurate the [government’s] 2013 study is.”

4. Whatever the actual amount, resident hunting in BC and the GBR “represents a circulation of already existing money rather than new money entering the province.” According to statistician Jim Johnson of Pacific Analytics who is a lead author of the CREST study, “resident hunting therefore should not be viewed as providing any substantive net economic benefit to the BC economy.” In contrast, non-resident hunting does bring new revenue into the province.

5. The BC government’s administrative apparatus overseeing bear hunting “is complex, cumbersome, and costly.” Government technicians said “they had no information on the cost of managing bear hunting” and they were “unable to answer the basic question [posed by the CREST study]: How many bears are hunted and killed each year within the Great Bear Rainforest?”

The CREST study was carried out according to Stanford University’s research protocols and used the same National Accounting criteria that Statistics Canada uses to determine the economic importance of all industry sectors. The research included surveys of bear viewing companies, visitors, and guide outfitters; in-depth interviews with government officials, businesses, Coastal First Nation leaders, hunting and wildlife viewing associations and organizations involved in the GBR; and an extensive literature review. In addition, CREST entered into a research agreement with BC’s Ministry of Forests, Lands, and Natural Resource Operations to obtain documents, statistics, maps, and other materials related to bear hunting.

The study, Economic Impact of Bear Viewing and Bear Hunting in the Great Bear Rainforest of British Columbia, can be downloaded at www.responsibletravel.org