Review of Peace Through Tourism 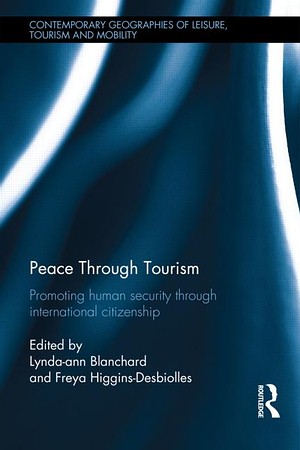 Peace Through TourismThere are some fundamental contradictions in the definition and perception of Tourism (and consequently “Peace Tourism”) and this important book sets out to investigate them. Is it an industry or a phenomenon (or both)? Is it about personal recreation and satisfaction or about collectively reshaping the world (or both)? On the one hand the international community seems to treat it as a light topic along with recreation and on the other, perhaps as a reaction, international tourism bodies frequently use hyperbole and self-praise about the peace-building, job-creating, conservation-supporting and the other innumerable abilities of “Tourism”, their constituency. (All industries & sectors do that of course, not just the Tourism industry, they massage statistics and exaggerate their importance so as to receive priority in an era of diminishing funding).

We are endlessly told that Tourism needs Peace and that Peace needs Tourism but despite the many wars and travel advisories since the end of the Cold War, global Tourism has carried on growing rapidly, both in terms of numbers and infrastructure. One can equally hypothesize that tourism does not really need peace, only a relative absence of war and a semblance of normality, and that Peace does not really need Tourism, or at least most of its forms. Is there anything inherently peaceful about Tourism? Around the world many regimes, their military, relatives and protégés still have a lions share in the tourism and real estate sectors. At the same time coastal tourism developments are an important part of the international land grab by northern multinationals displacing traditional communities. Thus one can justly argue that the development of certain forms of tourism by certain stakeholders creates or accentuates conditions (inequality, exploitation, environmental destruction, displacement) which directly threaten peace.

Impartial investigations of Tourism's peace-building abilities at an academic level are few and far between. Therefore, and even though peace tourism proves elusive and hard to accurately define even by the well-informed authors of this volume, this collaborative effort is very worthwhile and informative and one which must be continued as it has produced some inconclusive and contradictory results. The title of this volume would more accurately reflect its content and conclusions if was formed as a question: “Peace through Tourism?”

The book, which took three years to complete, was funded by the Tokyo-based Toda Institute for Global Peace and Policy Research which focuses on “nuclear disarmament, UN reform, and environmental ethics” and supported by the Centre for Peace and Conflict Studies (CPACS) at University of Sydney where some of the contributors work. The Editors besides being academics are also very actively involved in peace advocacy and activism through tourism and this may have helped them in successfully choosing and balancing the book's content. A key characteristic is that about a third of the chapters have been written by peace tourism activists, practitioners and NGO and community representatives who may of course not be fully impartial about their own organisations' work and impact but still provide first-hand information, useful facts and certainly understand the issues in their full complexity.

In the introductory chapter “Peace matters, tourism matters” the Editors offer a brief literature review on definitions of Peace and clarify their viewpoint, arguing that Tourism matters, that it is not merely one more "industry" and indeed one of "hedonism and frivolity" but rather "one of the most important forces shaping our world" due to its "social, cultural and even spiritual capacities". The book is split in three parts. In the first part there is an indirect and rather inconclusive attempt to define “peace tourism” from various angles which includes the experiences with developing Australia's first 'peace through tourism' tertiary course, sobering case studies from Timor Leste and Palestine and an ethicists' hypothesis on whether, beyond the rhetoric and the hype, actually-existing forms of peace tourism (can only) end up being one more unequal, exploitative and neocolonialist, relation - an interesting if somewhat depressing theory.

Part II contains 9 relevant and thematically and geographically diverse case studies including cases from the Koreas (national reconciliation by developing a joint tourism project Mount Kumgang), India (developing “peace” tourism in conflict zones and developing conflict through tourism in peaceful zones), Japan (tourism in Hiroshima and Nagasaki and international and bilateral reconciliation fora aboard the Peace Boat which operates out of Japan), Australia (low-cost social tourism acommodation facilities for Indigenous Australians), Kenya (investigating the religious motives of some voluntourists) and Israel-Palestine (peace activism through tourism in Jerusalem). Some of the case studies like North Korea's Mt Kumgang show the limitations of top-down approaches, and others like the Peace Boat show that grassroots, citizen diplomacy & tourism mix a lot better.

Part III is also dedicated to Palestine. Depending on their interest in an otherwise hotly-contested issue, some readers may find that the coverage (about a fifth of the book) of tourism-related injustice and justice initiatives in Palestine is too extensive and partisan. All readers however should appreciate the high detail of rare information on the emerging Palestinian Tourism sector as food for further and deeper thought about the role that tourism can realistically be expected to play in bringing about a peaceful, just and lasting solution. Otherwise, as expected by an academic publication to a general audience, the book generally avoids political and ideological references and preferences. That said, despite the odd supportive references to “corporate social responsibility” and the ability of tourism corporations to become/appear benevolent under pressure from 'ethical' NGOs, there is an anti-neoliberalism / indigenist leitmotiv in most chapters, which is refreshing in a sector usually dominated by capitalist phraseology. Equally surprising is the criticism in one of the chapters against one of the older and better known peace tourism NGOs whose work is dismissed as rhetoric along the lines of “holding conferences in five star hotels” and “organising peace tours without a peace content”.

This thought-provoking book reveals from many angles and at many levels that the development and maintenance of a “peace” tourism in its various positive and negative forms and uses (including justice tourism, solidarity tourism, reconciliation tourism, social tourism, volunteer tourism and perhaps propaganda tourism, subversive tourism, dark tourism / thanatourism and even non-tourism in the form of tourism boycotts) is fraught with operating and ethical difficulties. The elephant in the room (and in the book) is that Peace Tourism is invariably dangerous, and sometimes lethal, for peace tourists and activists, so, in its purer forms at least, it is not a current that can ever become trendy even if it proves increasingly relevant in a turbulent 21st century.

As advocates of an ecological & socially just tourism based in a traditionally turbulent part of the world (Balkans, Eastern Mediterranean), among the research we would like to see and possibly facilitate is if a small-scale, low-impact, community-owned tourism which meets social and ecological justice standards (rather than Tourism in general) can produce enough power to keep a civil or intercommunal war off-limits – that is if oases/pockets of peace and justice can be created, maintained and connected through tourism.

Let us hope (as hinted by the editors?) for a follow-up volume in the near future, with a multidisciplinary analysis including politics and history and case studies, successes & failures, from some of the many other difficult corners of the world - emerging “peace tourism destinations”...!