Book Review: "Lost in the Wilds of Greece: A Love Story" 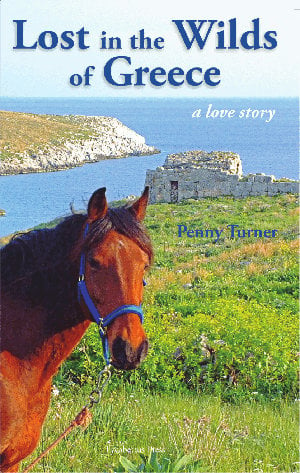 "Lost in the Wilds of Greece: A Love Story"

A rider and a writer! This is adventure travel literature at its best - as far from glossy travel advertorials and the places they promote you can get! It will act as a revelation to most travellers who have never realised or come anywhere close to the majestic, densely forested, Alps of Central and Northern Greece. Even though adventure travel by horse concerns only a tiny minority, this book will entice a far broader green audience who is fascinated by and care about preserving the last remaining wild places.

The author arrived in Greece 40 years ago and worked as an English teacher and examiner, based in Thessaloniki and as a conservationist with Arktouros, a leading Greek NGO that focuses on bear and wolf conservation. Through the daring adventures analysed in this book she earned the coveted title of Member of the Long Riders’ Guild, having completed a single journey of 1,000 miles for the first time in Greece and was also accepted as a Fellow of the Royal Geographical Society.

The adventures criss-cross Greece, east to west, south to north and many other combinations, and took place from the early noughts to 2014. Nearly ten thousand kilometres were covered by Penny and George, her heroic horse. He was born in touristy Corfu and trained for pulling a horse carriage with tourists, but he was built for the mountains and vast expanses with a personality to match.

The discussion is humorous – a hybrid British/Aristophanic humour, blended with surrealism at times, all necessary ingredients when trying to cope with the tiredness of riding and analysing life in the mountains, the plight of economic migrants walking mountain routes at night, horrors against the environment, ranging from waste refuse, illegal hunting to open pit mining, the effects of the financial crisis, and the occasional village idiot.

Overall, it is an opinionated, colourful, description of Greek countryside people and places, the good, the bad and the ugly. Villages, people and animals that treated Penny and George with genuine hospitality and respect are mentioned by name, the rest are cursed and their names omitted, with a few exceptions. There is a thriller element that includes tense encounters with shady characters in remote places and near death experiences such as sharing a narrow bridge with the Athens Express, entering tunnels, falling from cliffs, avoiding falling trees, or sinking in the toxic mud of what is now left of Lake Koroneia. Matching quotations, proverbs and anecdotes in generous doses, place the adventure being told in a bigger context.

The author has a piece of advice for everyone: from policemen and priests to mayors, the church, and government ministers and the EU. Depending on your own viewpoint you may find it arrogant or spot on, but you will agree the author is well-meaning and that her criticism is constructive even if sometimes sweeping and pessimistic.

Among many exciting theories advocated by the author, we picked this one: Signs in protected areas that treat the visitor with respect work best and are not vandalised, unlike “thou shalt not” types (these end up looking like a colander). She also argues in favour of not enclosing archaeological sites with cement and barbed wires and leaving them in a romantic, free to visit, state.

There are a useful index and an unusually high number (172, to be exact) of rare photos of equally rare fauna and flora in Greece, such as wild cats, “record-breaking” tree frogs, giant moths, vipers, bear footprints, wild horses (of course), rare butterflies, orchids and other endemic flowers, and the occasional anarchist graffiti “is there life before death?”

Probably intentionally, so that the reader also gets lost in the wilderness, there are no maps! The author argues on p.7 that not knowing exactly where she was enabled her to better appreciate the mountains rather than being ruled by preconceptions. This was not a problem for the author, and will not be for the reader either, as long as you have a general idea of Greek geography or a detailed map nearby. Do not expect to find many practical details either - they would have spoiled the action - or to be able to use this as a guidebook by itself, but it is undoubtedly an excellent accompaniment to one. Some information is over ten years old, but the author makes an effort of updating her assessments from earlier travels. The author is more concerned about the present state of the environment and of local people rather on the historical and cultural background, events and local festivals, but she covers a number of the most scenic archaeological sites. Somewhat peculiarly, there is no mention of the Greek Civil war 1946-49 that devastated through heavy fighting many of the areas she explored and left a dangerous legacy of minefields, still being cleaned.

This is an excellent book for Horse Lovers, Hikers, Travel Literature Fans, Geography Buffs, Seasoned travellers, Nature photographers. Environmentalists. Certainly not for nationalists that feel threatened and offended when a foreigner speaks the plain truth about their country.

Ms Turner comes across as a staunch environmentalist, rather than ‘wishy-washy liberal’ as she puts it, she is anti-development, anti-capitalist even at times, and we can sense her genuine anger about the poor state of the Greek environment, industrial exploitation, mining and farming excesses, poor waste management practices, hunting, irrational subsidies for agriculture and holiday home developments. She remarks: ‘the wonders of the enormously varied Greek landscape are being sold to the multinational companies. And boy are we letting it go cheap”. Well, we need more ‘knights’ like her to stop letting it go cheap.

Successful travel literature means transplanting memories, after reading this books readers will feel as if they have experienced all these thrills themselves and came out wiser from all those bittersweet and occasionally amusing experiences.

This is not a case of a travel writer with an organised plan to write a pioneering book on horse tourism in Greece, but rather a horse lover deciding to share their adventures with the world in an honest, humorous and refreshingly disorganised/unplanned manner. It fully succeeds! The author promises by naming the last chapter 'Not the End', so we very much look forward to a follow-up volume.

Special Member Offer:
"20% discount on "Lost in the Wilds of Greece" by Penny Turner.
This is an exclusive offer by Lycabettus Press to ecoclub.com Members.
(VAT, if applicable, and postage outside Greece are extra).
Ecoclub.com Members: to place your order, please contact us