5 Reasons you will want to visit this Victoria, B.C. neighborhood 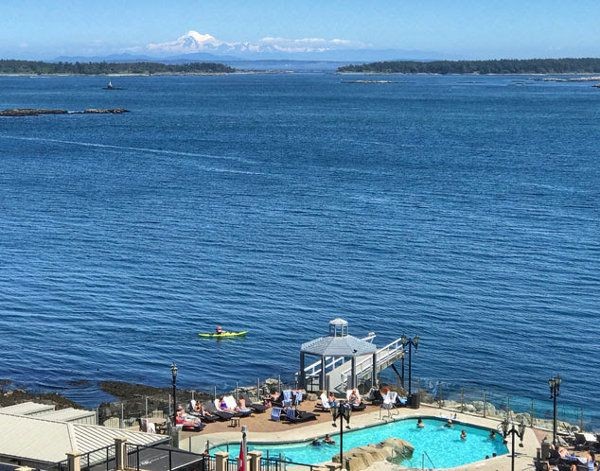 Victoria is often linked with afternoon teas and retirement condos for seniors but as I slipped into Oak Bay, a small community in the Victoria capital region, I discovered an unexpectedly eclectic destination; much of it was hidden in plain sight.

Although Oak Bay is only a ten minute drive from downtown Victoria this municipality of 18,000 boasts its own police force, a main street that closes for tea party races, two marinas, and its own sea monster. Popular with British settlers, hence the moniker “behind the tweed curtain”, Oak Bay streets are dotted with Faux Tudor architecture and manicured flowerbeds.

I settled into a chair overlooking Haro Strait at the Oak Bay Beach Hotel and sipped a pinot gris as I watched visitors enter The Snug pub. According to the sign near the door it was established in 1954 but the date seemed at odds with the sparkling new appearance of the hotel.

I learned the hotel’s long-time owner had closed the beloved hotel in 2006 to make it earthquake-resistant. For six months the hotel was dismantled; items destined to be reused were put into climate-controlled storage. Even plants were dug up and sent to a farm outside of town until restoration was complete. Unfortunately restorations took six years and shortly after the new hotel opened it went into receivership.

The hotel is now owned by OB Hotels Ltd. and continues to offer ocean views just past its mineral pools. Sea lions and orcas are sometimes seen and river otters have been spotted in the hotel fountain. I watched bats and humming birds from my balcony as dusk settled on the water.

Early the next morning I met Brian Henry, owner of Ocean Rivers Sports in the lobby for a morning kayak trip. “I met my wife in the Snug Pub,” he recalled on his connection to the storied property. “Oak Bay has so much nature, with more birdlife, more marine mammals and sea life. The currents in Oak Bay area are also much more active and vibrant.”

Our group of kayakers followed him down the road to Oak Bay Marina where Henry has a specially crafted dock. I climbed into my kayak on the dock before being gently eased into the water guaranteeing there was no water in my kayak and no me in the water!

Once underway Henry pointed out a river otter splashing nearby. We practiced our paddle strokes as we kayaked past several purple martin houses installed by marina owners. Purple birds dipped and soared as they gobbled up insects.

We road the swells to Harris Island where harbour seals basked in the sun. I grabbed a shiny strand of bull kelp as Henry encouraged us to taste it. The salty, crunchy seaweed was better than expected.

Wild seals have turned into buskers

Returning to shore we spotted several seals patrolling the waters underneath the harbour office and gift shop. With a $3 bag of chopped fish I was able to turn these playful pinnipeds into seal buskers. Wanting me to throw food their way, one seal slapped its stomach, another clapped its front flippers and barked, one seemed to flutter upright but it was the one who waved that got my fish. Out of food I left these entrepreneurial marine mammals and headed back to the hotel.

Small gardens are yours to discover

Although you can walk to many places in Oak Bay I needed extra time for unexpected nature. Small gardens are tucked throughout the community and I slipped into Oak Bay Native Plant Garden where old oaks stood watch over ponds sheltering rare plants.

I lingered on a bench and breathed deeply, alone in a garden meters from where cyclists and drivers zipped by. They may have been unaware of the interesting discoveries to be made in Oak Bay but I was glad I’d taken time to peek behind the curtain.

Oak Bay Beach Hotel offers waterfront lodging and mineral baths. Visit the spa before lounging near the ocean to watch for wildlife. www.oakbaybeachhotel.com

Carol’s travel writing has been featured in BBC Travel, Roads and Kingdom, Fodor's, Alaska Magazine, Red Deer Advocate and Avenue magazine and she is the author of several books including Sustainable Tourism: Business Development, Operations and Management. You can tag along on Carol’s adventures on her YouTube channel or on Instagram at thecarolpatterson