"Development agencies do tend to be quite defensive in terms of post project evaluations at present in my experience, and few agencies widely publish or publicise evaluations. This means that negative evaluations are rare, although intervention failures can be many" 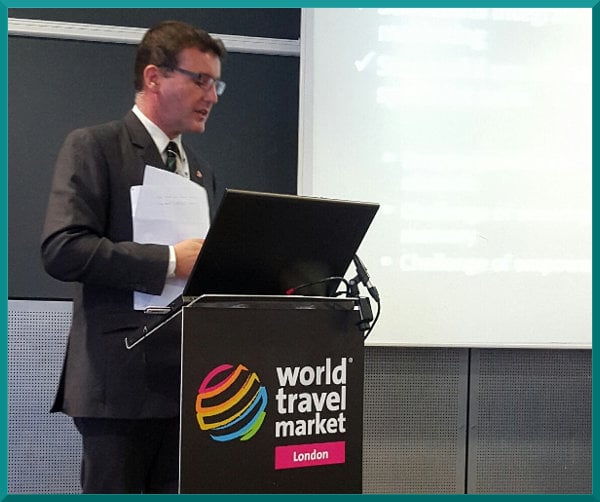 ECOCLUB.com: Among the many types of governments and tourism administrations which you have consulted which have been your favourite and why?

Robert Travers: As a consultant one offers advice: This advice is not aways taken! It is, of course, rewarding to see Governments or tourism administrations following and implementing advice, but the ability and political willingness of Governments or tourism administrations to manage tourism vary considerably. My favourites tend to be those who participate in developing consensus around recommendations. Often, perhaps surprisingly, these are sometimes one party states in consensus-based societies, as opposed to adversarial democracies. To be more specific, I have seen governments in Vietnam and Laos debate and (eventually) implement recommendations made in Tourism Master Plans and other studies with good success. Also working with UNESCO on World Heritage Site management issues, I note that the ability and willingness of governments and tourism bodies to implement recommendations varies considerably and that often they take a long time to implement recommendations.

ECOCLUB.com: You have cooperated with most of the major development aid providers, including state, private and non-profit. Do they have major differences in their mode of operation and aims?

While aims of aid providers and NGOs are often similar, there are big differences in approach. The private sector has more direct, commercial concerns. All aid organisations have their own bureaucratic procedures which need to be worked around: The EU and United Nations agencies have their own systems, as does USAID. But in some cases, I have found USAID to be more 'flexible' in terms of its rules on who and how it will help projects it likes. NGOs also have their systems and the modes of operation vary. So there are many differences and consultants must be very aware of their clients' agendas. 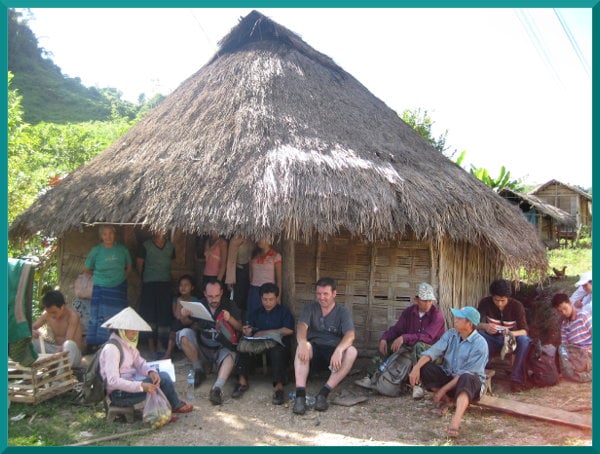 Robert Travers in Laos, near Vieng Xai (City of Victory), the underground communist HQ during the Vietnam War.ECOCLUB.com: A lot of effort, and to some extent funds, have been invested in sustainable tourism certification with mixed results so far. Is certification so important in your view in terms of meeting the Sustainable Development Goals, or just a tool among many?

Robert Travers: There are definitely too many tourism certification schemes with diminishing value in terms of market awareness of newcomers. Schemes can vary considerably in terms of their robustness which has the effect of undermining the value of most schemes. Some are certainly still of value, particularly demanding schemes, but increasingly the market is becoming more critical and online social media 'grading' of property standards (such as TripAdvisor's GreenLeaders) are increasing in influence.

ECOCLUB.com: The UN seems to be doing a good job in terms of transparency, but how satisfied are you with the overall level of transparency in the development sector? Are transparency and a level-playing-field necessary, or is the ability to learn about and win a project, an implied prerequisite and a filtering mechanism?

Robert Travers: I suspect that the Internet is having a significant impact in terms of creating a level playing field for tendering. Recruiters increasingly rely on Internet searches to find candidate companies and individuals, and so reliance on personal networks is probably declining. This is a good thing. The ability to seek online tenders and to ride the challenge of social media are becoming very important in consultancy, and it is good to see younger CVs getting into the race by this means.

ECOCLUB.com: Based on your global experience, what is your evaluation of the overall sustainability of tourism in your native Ireland?

Robert Travers: Tourism development in Ireland remains relatively small scale outside of Dublin. In many ways, we are a "boutique destination". We do not have many very big hotels in rural and coastal areas compared to other (sunnier) locations. Planning laws and public pressure are quite conservative, and so the scale of tourism development (mostly a factor of demand and seasonality) tends to be modest. There are certainly areas that need tightening up in terms of sustainability - in particular, there are issues regarding ground water quality and lake water quality in some tourism areas. These are probably the result of weak overall environmental controls on all sectors including agriculture and urban development, rather than specifically being the result of tourism development, however. So yes I would consider Ireland's tourism to be relatively sustainable in economic, environmental and social terms, but this is perhaps by default rather than the result of robust ecotourism policies in the past.

ECOCLUB.com: Would the world of tourism development become any wiser or more effective, through the public, as opposed to internal, assessment of failed or semi-failed sustainable tourism projects? How realistic is to expect that such public documentation will sooner or later become obligatory?

Robert Travers: Yes, I believe that more effective sharing of evaluations of tourism (and other) development interventions should be possible and that it would be helpful if accessible and easy to search. Development agencies do tend to be quite defensive in terms of post project evaluations at present in my experience, and few agencies widely publish or publicise evaluations. This means that negative evaluations are rare, although intervention failures can be many. 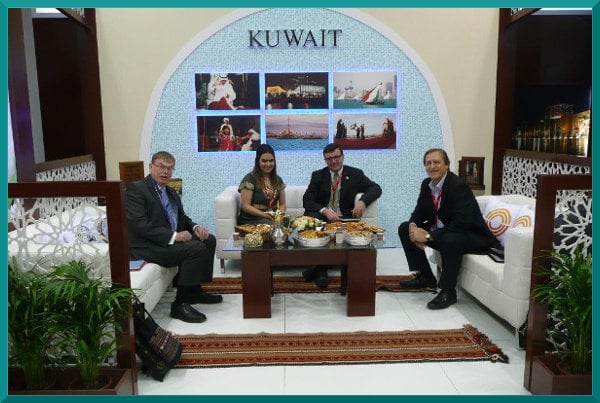 Robert Travers, with Team Kuwait at ITB BerlinECOCLUB.com: You have been involved with various sustainable tourism projects in regimes that could be described as autocratic or semi-democratic at best. Are such projects any different from comparable ones in other countries, in terms of goals, procedures and who is setting the agenda? Are such projects politically neutral, or could they also undermine or, inadvertently, prop up a regime?

Robert Travers: Tourism is rarely politically neutral. Any Government with a tourism policy will be making selective choices and setting an agenda. Like the presentation of history, what is developed for tourism is selective and all Governments usually have an interest in the messages being promoted. These often impact on inward investment and self-image as well as tourism. In Ireland, for example, the state has often made choices about what periods to preserve/present in historic buildings restoration, and what historical figures and messages to publicise. However today I don't see Government tourism messages undermining or propping up regimes to the extent to which organised tourism might have done during the Cold War. Partly this is because social media are now much more critical of propaganda, so it is more difficult to hide behind tourism facades. Even the European Union, however (which I suppose some might consider autocratic and semi-democratic) has agendas when it comes to tourism: a large number of EU-sponsored products and trails are EU-funded to connect regions, for example. Sometimes these are more to do with political agendas rather than proven market demand.

ECOCLUB.com: A lot has been written, but not yet proven, about the peace-building abilities of tourism. With reference to your work in Northern Ireland and post-conflict destinations (Rwanda, Georgia and Timor-Leste) do you believe that tourism can bring peace or that, rather, peace is a pre-requisite of tourism? And are all forms of Tourism equal in your view, or is grassroots, sustainable tourism more potent in terms of peace-building and more resilient when peace is lacking?

Robert Travers: My experience is that peace is a pre-requisite for tourism. In Northern Ireland tourism expanded during periods of ceasefire and following the Good Friday Agreement. This also did indeed involve people on both sides of the border crossing from south to north (and vice versa) and getting to know and humanise places that they had rarely visited in the past. This was mainly mainstream tourism rather than grassroots (community-based) tourism. In Rwanda, on the other hand, local NGOs played a key role in developing grassroots tourism that addressed the post-genocide situation there. So it is difficult to generalise: Certainly main steam tourism will reach more people than CBT if the circumstances allow it to develop.

ECOCLUB.com: A related question, at a time of increasing war refugee and economic immigrant flows, resulting in tragic drownings and untold misery in detention centres and threatening liberal democracy through the rise of xenophobic parties around Europe, is whether Tourism can really create jobs, and fast, back in the countries where these fellow human beings came from. And who will this "Tourism" be? Grassroots, community tourism efforts? Big tour operators? Multinational Hotel Chains? What is your view?

Robert Travers: This is indeed related to your question regarding peace-building, and as I said earlier I believe that peace is necessary to develop most forms of tourism. At present Europe is seeing migration from North and Saharan Africa, from Syria and other conflict zones. Until these conflicts are resolved, tourism is unlikely to create substantial numbers of jobs in these out-migration areas. As to the kinds of tourism that are likely to develop once stability of a sort is in place, my experience is that business tourism rather than leisure will lead the way. In the longer term, these areas do still have magnificent assets for tourism, both mass tourism and small-scale. It is important to preserve these great assets for the future: Leptis Magna and Palmira, the Bardo Museum and the Bamyan Valley in Afganistan will once again support jobs in tourism.

ECOCLUB.com: What key advice would you offer to 18-year-olds who are aspiring to follow your footsteps as a sustainable tourism consultant? Should they work first, study first, volunteer first?

Robert Travers: In my view, is essential. Certainly, degrees are needed today more than ever, but the two can be combined.

ECOCLUB.com: Thank you very much for these valuable insights and assessments. It is clear that more needs to be done in terms of the transparency and effectiveness of sustainable tourism interventions, but, as these do not take place in a vacuum, justice and peace in a destination is of paramount importance.