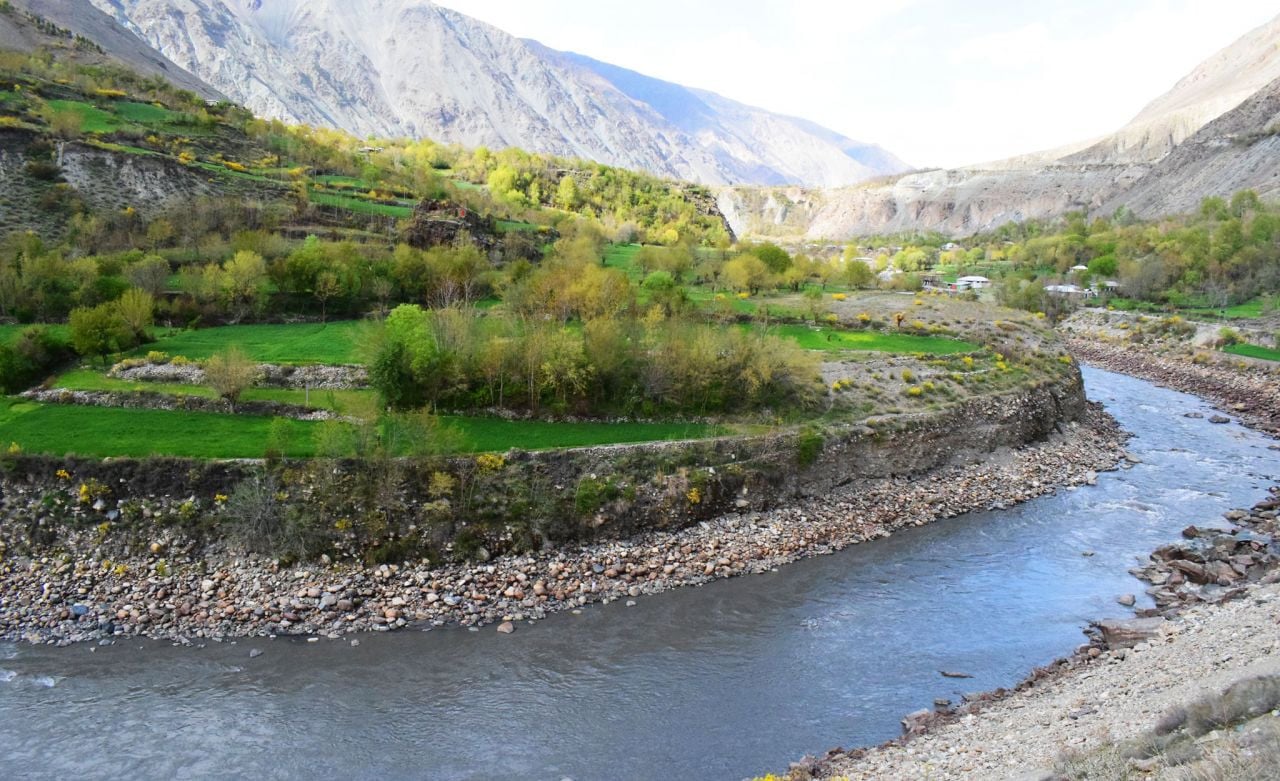 Saturday, 10 April 2021, at 05:25 am. Mr. Shams Uddin, the famous trekkers of the region, started trekking from Chitral town to Booni, the headquarter of district Upper Chitral. It was a beautiful day, partially cloudy.

Reached Kari by 07:36 am. The village looked beautiful in the sunshine of the early morning. Traveled up to gain a panoramic view and took some pictures from the top.

It was 09:45 pm when he reached Ragh. Traveled up the settlement to go around the village on the hillside. The vegetation here has grown rich in color interspersed with a variety of wildflowers. He found mega-size wild tulips, of which he took pictures along the lower and upper Kuju villages. At Kuju bridge, crossed onto the left, trekked across the settlement, recrossed to the right (Koghuzi side) via another bridge above.

Made it to Korghuzi by 11:35 am and had lunch at the house of Mr. Fida Hussain, a reputed tour guide, who is related to the tourism industry for a long time. His elder showed good hospitality.

Koghuzi is a beautiful village and launching point of two famous treks i.e. the 5-day Golen-Phargam pass-Laspur to the north-east and a 3-day trek to Madaklasht to the south. Golen village offers beautiful natural sights for camping, trout-fishing, and short walks in the forest.

At Mroi village went to see Mr. Babu Muhammad, the senior tour guide of the region. Whenever he mentioned his plan of the trek from Chitral town to Booni, many people had asked him to communicate their good wishes to Babu Shb. He was a great source of guidance and support for the promotion of tourism during his stay in the Mountain Inn till 2016. Overall, he is in good health, except that of aging factors. May God bless him with a long and healthy life. He took brief rests at the hotel of both lower and upper Mroi before departing for Barinis. To the left of Barinis, a route across the Prayet village leads to Phasti (village), which further leads to Lot Ovir to the north, and Lot Koh to the west.

When he reached Pahanlasht, the first village of Barinis, it was 07:34 pm, and quite late, so he decided to stay in the village. Went to a house with a guesthouse, knocked at the door. A young man appeared, he greeted, and asked to make arrangements for his stay, which was happily done. The name of the house owner is Mr. Aminullah, and his forefather had migrated from village Kosht in 1934. He was a good host and made proper arrangements for food and accommodation.

When he got up early at 05:00 am, it was heavily raining. But the rain stopped half an hour later and he embarked on his travel. Had a late breakfast at the house of Syed Sardar Hussain Shah (Gimlashto Shah) and then proceeded on to Reshun, a historic village known to tourists. It has a polo pitch where free-style polo is played twice a week. There are more than 24 horses available, and tourists can enjoy horseback riding here. It is also a launching point of a 2-day trek along the Reshun Gol pastures to Booni Gol and onto Booni village. The trek affords picturesque scenes for photography besides seeing flora and fauna. A recently explored trekking route leads to Lone, Gohkir, and further on to the Kosht and Morder villages and other settlements of the Mulkhow tehsil. Still another route i.e. Lot Owir-to-Phasti starts from the village.

The Shogram village locating to the left of the Chitral river is the birthplace of Baba Syar, who lived during the latter half of the 18th century. He traveled far and wide and was the learned man of his time in Chitral. He wrote Persian poetry characterized by “spiritual romanticism” in the style of Hafiz Sherazi, preserved in a book named “Diwan-e-Syar”. He also wrote an epic glorifying the history of Chitral. But what he is remembered for is the long Khowar song “Yarmin Hamin”, reflecting his feeling of love, which has also been enacted and telecast by Pakistan Television.

At Kuragh, visited Little Star Hotel for tea. He met Mr. Gul Faraz, the owner, and manager of the hotel. It is a small premises, but very cleanly maintained with the service of delicious foods. Kuragh is the first village in Upper Chitral, where motor repairing workshops, grain godown, and the market started working after the 1970s when the truck-able road was constructed for the first time.

At Charun visited the “Charun Rock Inscription”, preserved by UNESCO under a covered area. Most of the tourists, both foreigners and domestic, stop here to visit the site. It is located a few yards above the main road at what is called Rishto Goch. A road across the river to the left leads to Bombagh Fort, Kosht, Morder, and the Upper Molkhow region. Another route on the right leads to Charun Owir, from which a trekking route crosses onto Booni over Shishipishoon. Pawasun is a beautiful destination right above Charun, which has become a point of attraction for both local and national tourists in recent years. It has a peaceful natural environment, affording nice opportunity for photography and camping.

Reached Booni by 06:30 pm after traveling 32 kilometers from Pahanlasht, Barinis. Booni is the headquarter of district Upper Chitral. It has huge trekking and camping opportunities. Shipishoon, the lush green meadow above the village attracts a large number of tourists in spring and summer. In winter skiing is organized here. Qalasht, another lush green meadow is also located close by. After having a stay at Booni, tourists can proceed onto Mastuj and then either to Gilgit to the East or Broghil to the north. Another route from Booni leads to the Torkhow valley gifted with tremendous natural beauty. The famous 3-day trek from Rech-Upper Yarkhoon valley starts from Rua, in the Rech village. Booni has better accommodation facilities including PTDC, hotel services, and good quality village guesthouses.

Lastly, he would like to thank the residents of all the villages he crossed, the transporters, who stopped asking why he was walking by foot, the families who accommodated him overnight and guided him along the route.