"The economic crisis has been the perfect time to improve the economic results of big businesses on the backs of salaries and working conditions of workers. This cannot be sustainable tourism"

Nuria ChacónNuria Chacón has a Degree in Environmental Sciences and a Master in Ecosystem Restoration from the University of Alcalá. She is the co-founder of STIPA Estudios Ambientales SL, an environmental consultancy and ecotour operator. Nuria specializes in management and conservation of wildlife and protected areas, with a strong and growing interest in the social impact assessment of conservation projects and Ecotourism as a way to develop and conservation of natural-rural areas. She is an active Member of ECOCLUB.com - International Ecotourism Club and of other organisations such as The International Ecotourism Society and the European Ecotourism Network (ECOLNET). At the local level she participates in the Land Stewardship Network of Castilla-La Mancha and Madrid and Ecotourism Castilla-La Mancha Association.

ECOCLUB.com: What first attracted you to this career and what are your main goals?

Nuria Chacón: I studied a Degree in Environmental Science and later a Master Degree in Ecology Restoration, so my professional career was focused on natural heritage, wildlife and protected areas issues. I founded a consultancy firm in 2008 and we decided to locate at Cuenca city, far away from Madrid because my colleague and I thought that rural areas had the right to develop technical works with young people. Since I live in Cuenca I believe that this region is a treasure hidden in Spain and a potential nature and ecotourism destination as well. Its potential resources and our experiences as ecotourists in Nicaragua where we visited organic coffee farms and several natural places was our beginning into the field of ecotourism.

ECOCLUB.com: Cuenca, where you are based, is a historic walled town and World Heritage Site. What are the main challenges of tourism in Cuenca in your view, and to what extent is its tourism environmentally, socially and economically sustainable.

Nuria Chacón: Cuenca, not just the city but the entire province, has a great natural and cultural heritage. It is mostly visited by domestic tourists. In my humble opinion Cuenca has great potential in terms of resources and a strategic position between two important cities, Madrid and Valencia, with good public and private transport access. But I think something went wrong with its promotion for years and it is still unknown as a tourism destination in both Spain and abroad. Our challenge, a huge challenge, it is to work with all stakeholders to make Cuenca a nature destination. To achieve this we really need to change the way we work, become more collaborative, more participative and innovative. We must add the need to work with locals in improving self-esteem of rural areas and the capacity for innovation and entrepreneurship of its people. But the most important thing is to work with honesty and transparency and help each other to work thinking about the destination and not our own companies. And that's a very important challenge and a change for all local tourism stakeholders.

ECOCLUB.com: Since you started, do you feel, or is there any concrete evidence that Ecotourism in Spain is growing in popularity among domestic and international tourists? Is there a critical mass of organisations, initiatives and networks?

Nuria Chacón: I believe that since we started our ecotourism initiative, and even before, it is perceived that Spain is developing a greater interest in ecotourism. Domestic and international tourism is growing and is looking for natural and emblematic destinations and even other less known destinations. Spain is well known as a “sun & beach” destination but its stunning biodiversity and global touristic trend also position it as a nature destination. And in terms of nature tourism, ecotourism in particular, it is evolving rapidly, probably because of global environmental impacts and higher awareness from citizens. Spain has seen the development of many small and local ecotourism businesses in part as a means of diversification due to the economic crisis. Although I personally believe that there is not currently enough demand for all existing companies, because working on creating destinations and products is lacking. In this context, the Spanish government recently announced a procurement to do a market research about the domestic and international demand for ecotourism in Spain. The last official study was done by UNWTO in 2002, “The Spanish Ecotourism Market” and it is really necessary to make complete market research that allows the design of effective national ecotourism strategies.

Cuenca CityECOCLUB.com: Are you satisfied with current efforts to make mainstream tourism packages to Spain greener?

Nuria Chacón: I think that we are at first steps to get the label “green destination”. There are many tour operators offering ecotravels in Spain, but curiously in Spain there are few travel agencies and operators specialized in this type of travel. This demonstrates how ecotourism is developing inside and outside of Spain. I think green travel is focusing on very iconic destinations and sometimes can be somewhat overcrowded. So we should work to diversify the destinations.

ECOCLUB.com: Tourism officials often praise the job-creating powers of mainstream Tourism. Spain was the 3rd most visited country in 2014 with over 65 million international tourists. Yet, at 22 per cent, its jobless rate is one of the highest in Europe. What is wrong with this model in your view?

Nuria Chacón: In Spain there has traditionally been a high rate of unemployment. But it is true that the very favourable data in tourism could be inconsistent with employment rates. The explanation is the existence of the underground economy and precarious work. And tourism has not escaped this, especially with regard to precarious employment. The economic crisis has been the perfect time to improve the economic results of big businesses on the backs of salaries and working conditions of workers. This cannot be sustainable tourism.

ECOCLUB.com: Barcelona Mayor Ada Colau recently argued in favour of limiting the number of visitors and has stopped new hotel licenses for 2015. Similarly, in the Canaries, new president Fernando Clavijo is mulling a cap on visitor numbers. In the past decade, there was also the famous but short-lived green tax in the Balearic Islands. What is your view of such tools? Do you see Ecotourism as a way to help degrow Tourism, or, on the contrary, as a way to keep increasing numbers yet in a 'sustainable' way?

Nuria Chacón: In my humble opinion, I think there are destinations like the islands or large cities, for example Madrid, Valencia or Barcelona, that should safeguard the quality of the services they provide to tourists and this is incompatible with an unlimited growth.

ECOCLUB.com: Have you visited or read about the city of Marinaleda in Andalusia? What do you make of it, as a green model village?

Nuria Chacón: Marinaleda is a famous Spanish town for its mayor and its policies. The town is a self-identified social-democratic and cooperative municipality of 2,700 people which has also been described as communist for its collectivist economy. The social and political system that has been implemented in the community and the good results obtained in terms of economic development and well-being of the inhabitants, has brought Marinaleda to the attention of the media in Spain and abroad. However, the model introduced in this Andalusian village has not been spared criticism, even from some of its inhabitants. Some people think that the village has stagnated, but mostly criticize populist Sanchez Gordillo, who has served 30 years as mayor. More than a green model I would call it a social model. 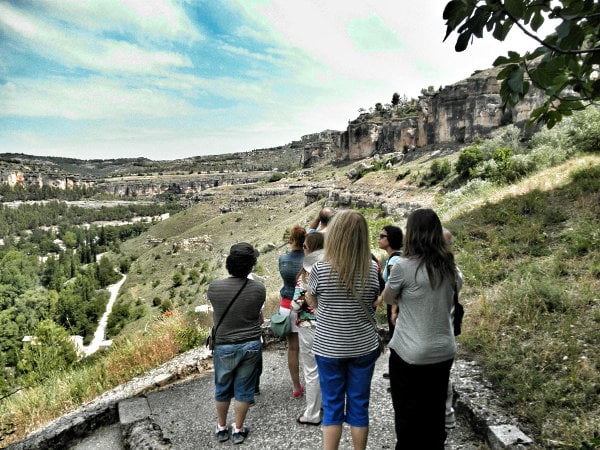 Leading an Ecotour in the Jucar Canyon River near CuencaECOCLUB.com: Your company, STIPA ESTUDIOS AMBIENTALES SL, an environmental consultancy, started offering its own ecotours in 2013, which is both rare and very interesting - presumably you can consult yourselves on a permanent basis so as to make your tours as green as possible! So please explain what sets your tours apart from the others? Are they more expensive from ordinary tours perhaps so that you can lower environmental impact and produce more revenue for the local community and environmental conservation?

Nuria Chacón: In Spain we have some exemplary companies in terms of ecotourism-responsible travel and we benchmark every day. It is not the same to offer a strategic environment and ecotourism consultancy and to offer ecotourism services every day. Locally I think we differ from the rest with regards to the commitment to environmental conservation and benefits to local people. In our routes we know the names and personal story of craftsman, chefs, waiters, etc. And we think that is very important. We also believe it is especially imperative to be honest and transparent to the management and the information provided to the clients, so that takes a good experience and image of the company. Our employees do a lot of volunteer work to promote the territory and to organize awareness activities, besides trying to encourage local businesses to offer innovative things such as local, organic and seasonal products.

ECOCLUB.com: Transport, in particular, is often the weakest link of any ecotour in terms of environmental impact, infamous examples being 4x4 or helicopter "nature" tours, but also the less evident air-travel to access remote ecolodges. How do you approach this?

Nuria Chacón: It is absolutely true that transport is the weakest link of any ecotour in terms of environmental impact. In our case, we always try to promote public transport to Cuenca city by applying an interesting discount. But the transport of our customers to different natural areas is necessary. Therefore, we are implementing a system for calculating carbon footprint to know well the environmental impact of transport at first and then be able to make the necessary compensations as well.

ECOCLUB.com: What is your evaluation of state and local tourism policy in Castilla-La Mancha, the region where you are most active. What needs to be improved?

Nuria Chacón: Castilla-La Mancha has a poor tourism strategy, particularly in relation to nature tourism and ecotourism. It has a vast territory protected with more than 100 protected areas including National Parks, Natural Parks, Natura 2000 Sites, Biosphere Reserves, diverse landscapes and emblematic fauna. It is a neighbour of the Extremadura region which itself has been known to have a long-term strategic vision. Therefore we need to create a critical mass of enterprises linked to tourism to seek and work with the regional government to promote the destination within and outside of Spain. It needs to invest money, energy and good ideas to establish the master lines of work in the coming years.

ECOCLUB.com: What has been your favourite project so far and why? What types of projects or initiatives would you like to be involved with in the future?

Nuria Chacón: It is difficult to select a favourite project due to the variety of them (marketing, product, destiny, best practices, etc.). In this case I would like to talk about Castile-La Mancha Ecotourism Network. It is a regional ecotourism association and it was born recently, but business and partners are really commitment with the philosophy and ethic code of responsible tourism. Another interesting project is Sustainability-Leaders.com which tells the stories of leaders in sustainable tourism around the world. As travellers, tourism businesses, organizations and service providers, we are all in this together. By following examples of leaders in the field of sustainable tourism and environmental best practice, it is much easier to put strategies in place. It is certainly easier than having to start from scratch. Looking to the future I would like to participate in some ecotourism project in other countries so as to gain professional experience and have a greater vision of ecotourism and be able to apply in my business and in my consultancy. I am especially interested in communication and social processes.

ECOCLUB.com: We thank you and wish you every success with your ecotourism plans in Cuenca and beyond.